Trailblazing teen crane operator Kate Fahey: ‘I don’t see any difference in me or one of the lads doing the work’ 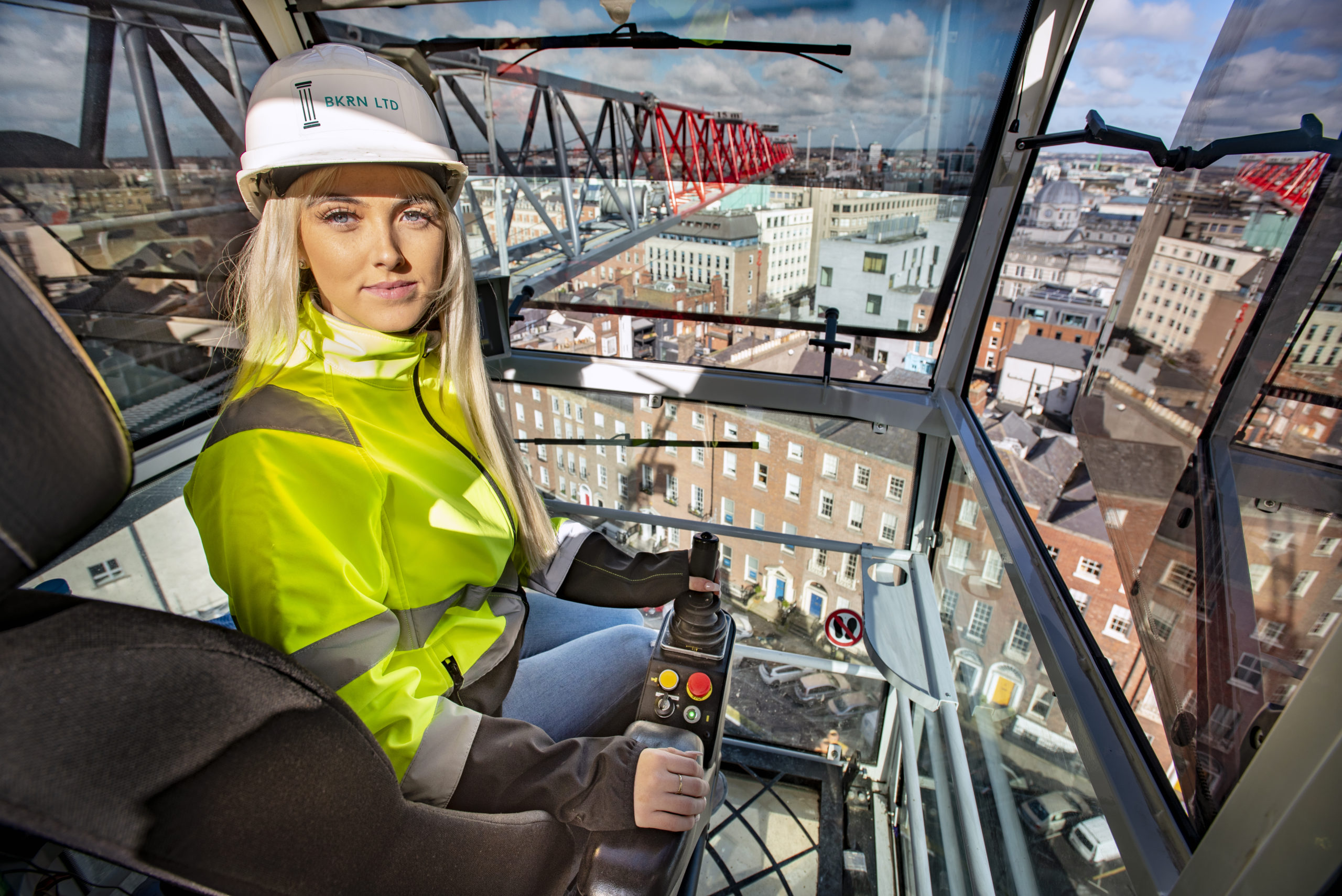 Sitting in a small box 130 feet above the streets of Dublin 18-year-old Kate Fahey is quite literally raising the bar for the construction industry. The first woman in Ireland ever to be a licensed crane operator, Fahey displays the sort of mental attitude you probably need to make history, a sort of casual ease in the wake of her own achievement.

“I remember when I got the cert and people were starting to say, you know, congrats! All I was thinking was, ‘congrats for what?’ Sure the crane does all the lifting,” she jokes. Yet in an instant, like a switch, she demonstrates the same level-headed practicality that makes the extraordinary seem commonplace. She describes a series of decisions that placed her a hair’s breadth from an entirely different career path.

Construction was never her intention. She was always going to enter into the field of science or medicine, perhaps a podiatrist. In fact, upon completing the Leaving Cert she had been accepted to two medical courses in Budapest. Each of which were themselves backups for a strategy to study in Ireland. She wanted time though to make her decision, deferring her offer for the next year. She opted in the meantime to take a summer working at BKRN Ltd.

“I just love working in a practical environment, outside, actually physically doing things. If I was stuck in an office I would crack up,” she says. 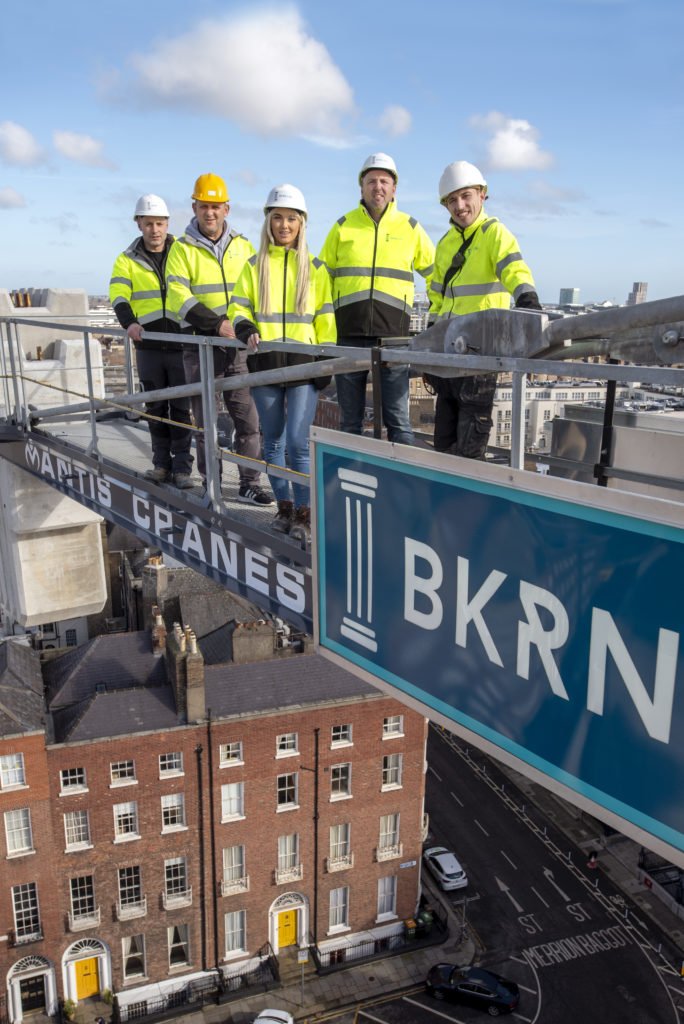 It was that energy that might have prompted crane operator Paddy Broderick to invite Kate to scale the crane for a routine weekly inspection, the paperwork for which she was helping with in the office. It can take a full 10 minutes to scale a crane uninterrupted such is the height they reach but Fahey describes being immediately at ease with the climb and in the cab.

“I think I might have shocked Paddy a little with how ready I was, I remember him saying ‘you’re either very brave or very stupid’.” It only took six months after that day for Fahey to become the first woman licenced to operate a tower crane in Ireland. Brave then. That instant switch is at work again when describing her typical day on site in the crane.

From one breath to the next she is laughing about her relationships with the other workers on site to diving in-depth into the
complexities and seriousness of the work at hand.

“There’s great craic on the site and I just love all of it, that back and forth with the lads and my banksman PJ Broderick,” she
says. “It’s really important to have that communication and know each other because during a lift, especially a blind lift, there’s not a word said that isn’t totally important.

“Just to be able to trust one another, be on the same wavelength and know your reaction times is so important.” Being the only woman crane operator in the country, and often the only woman on site, the reality is not lost on her.

“All the men at BKRN Ltd that I’ve worked with have been so encouraging, especially the foreman on site Thomas McGreal, but even still for some men it is a novelty seeing a woman on site working the crane.” She goes on to describe a materials delivery driver astounded by the idea that Fahey was in fact the banksman on site that day, going to far as to interrogate her to scrutinise her banksman ticket.

‘It’s not a very nice job for a girl’ she sometimes hears either spoken directly to her or conspicuously within earshot. Here it is where Kate Fahey’s grit is determined to reveal itself. “What’s the difference?,” she asks. “I think when people say that sort of stuff it drives me more, you know, because I can do it as well as you can.”

A resolve to triumph

She sees it as a challenge, and resolves herself to triumph. “I’m so stubborn, maybe. If someone says to me I can’t, well then, I do.” There’s a solid and practical approach to advance her career in the industry. She sketches out a three-year plan to complement her on-site work with a part time college course in Safety Training, likely to opt for the optional fourth year to upgrade to a Level 8 qualification, before casually mentioning a pathway to a Masters degree.

All this, of course, to remain “within construction and aimed towards cranes”. Not one to conform to a stereotype Fahey dispels the myth that for any girls considering a move into the construction industry they would have to sacrifice being ‘girly’. “A girl can be practical and ‘girly’ at the same time. It doesn’t make you any less feminine.”

She points out that like any young woman she likes make-up or getting dressed up, and to anyone who doubts it: “You can do
both. I do,” she says. “I feel like more females should get into the construction industry because what they can bring, even for a different way of thinking.”

Becoming the first female crane operator has hoisted a responsibility on Kate that she takes in her stride.
Not least of all enduring questioning from this reporter, but between this interview and going to print Fahey has appeared on local and national media outlets. She has received messages from young women in neighbouring towns asking how to get involved in the industry because seeing her they realise it is a viable option for them to pursue.

“People say it’s inspirational but I don’t see any difference in me or one of the lads doing the work. But if it does help another young woman to take the step and get into the industry than I’m only happy to help in that,” Fahey says.

“At the end of the day don’t settle for a job you don’t like. Even if one company you try for doesn’t take you on for whatever bias they might have, go look for another. Because like BKRN, any company worth their salt will take you on if you put the effort in regardless of if you’re a woman.”

What big change would benefit women in the industry?

“I think if there were more lads in the industry like those who encouraged me to do my best and trained me it would make a real difference.
My instructor for the cranes Paddy Broderick pushed me to pursue this because it’s something I wanted. My foreman Thomas McGreal was always there encouraging me and welcoming me on site. If more of the industry had that attitude to welcoming women in then we would be better off.”