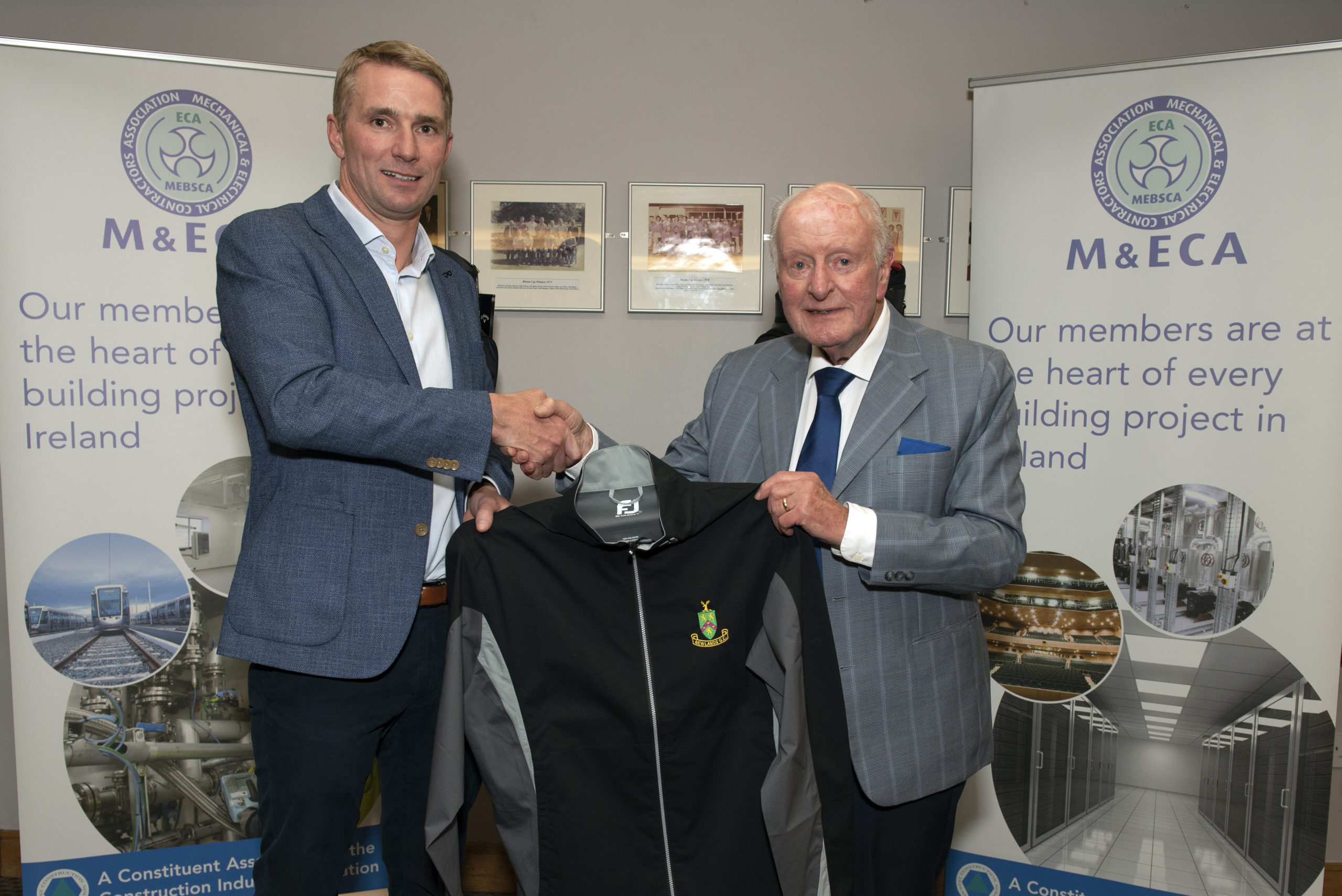 Pictured above is MEBSCA Vice President Paul Nicholls making a presentation to Des Binley for his long-standing contribution to the Association.

Des Binley is a true industry champion. Having started with Jones Group, then HA O’Neil, over the decades he has gone from working in fittings storerooms as a boy to leading and designing some of the country’s most impressive engineering projects.

A long-time collaborator with the CIF, he was recently presented with a special accolade at the annual M&ECA Golf Outing, now in its 40th year.

“The CIF’s Sean Downey and Denise Tuffy are two lovely people to work with. It’s great we all get to meet up and there’s always a good, friendly atmosphere.” The event was originally set up by four MEBSCA contractors – Eamon McGrattan, Denis Brown, Tom Lynskey and Ted Bourke – and is now a social highlight.

This year around 50 golfers took part after a two-year hiatus due to Covid. Born in Shankill, Co. Dublin, Bingley jokes that his construction career started “way back”.

“I was a boy with Jones Group but it was a great place to learn the business,” he says. A decade-long role with consultant engineers Delap & Waller followed, as did a 27-year career as Director alongside Teddy Bourke, who set up T Bourke & Co. The pair met during their time in HA O’Neil.

“I retired when I was 60 but went on and enjoyed working with Trinity College as a coordinator on some of their big projects,” Des adds. “In my career, I’ve met some very nice people, a great crowd of people, and I really do appreciate that.” Daniel Griffin and James Rael Junior, both of Rael Contracts

Forty and fabulous is how the saying goes – and it was no different for this year’s annual M&ECA big golf day out as it celebrated four decades hitting the greens – all in the name of construction camaraderie.

On September 1 the Mechanical & Electrical Contractors Association held its 40th Annual Golf Outing at Newland Golf Club in Dublin. Many of the country’s leading companies attended on the day. Aidan Bird, Eamonn Thornton and Willie Smyth, all from CJK The day was a great success and was followed by an evening meal where the champions of the day were celebrated in good sporting spirit. The 2022 MEBSCA President’s Prize went to Willie Smyth of CJK Engineering. Congratulations to the 2022 winners: Pictured below are some of those who took part in this year’s Golf Outing, above is the very first event in 1982 featuring some familiar faces.